What is the Continental Football Cup?

The Continental Football Cup (CFC) is football’s World Cup for the Continents. Each football confederation under FIFA assembles an all-star team of players from its member countries that will compete for the championship. There will therefore be six teams competing: Europe (UEFA), South America (CONMEBOL), North and Central America (CONCACAF), Africa (CAF), Asia (AFC) and Oceania (OFC + Australia). Each player’s nationality will determine the confederation for which he competes and in order to ensure maximal international representation, the number of players from any single country will be restricted.

How will the Continental Football Cup work?

The CFC will run for two weeks every four years, with the host continent determined on an equal rotation basis. The entire tournament will consist of nine games, all in a single country.

The six teams will be randomly drawn into two groups of three, and each team will play the other two teams in its group. The winner of each group will play the second place team from the other group in the semi-finals, with the semi-final winners facing off for the Continental Football Cup. 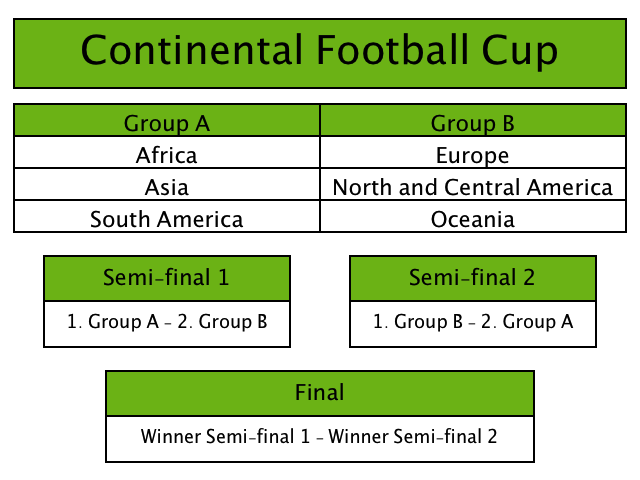 Why we want the Continental Football Cup?

The past has clearly shown us that football is more than just a game. It captivates almost every nation on earth, and the excitement and emotion of the games unite people from all walks of life. These shared experiences help build local, regional, national, or even – if our dream becomes reality – international identities. We feel that FIFA has the potential to better use its place on the world stage as a unifying force in our world. The Continental Football Cup would do just that: a tournament that unites all countries in a continent passionately behind a common goal.

Have you ever tried to imagine what an all-star team of players from your continent would look like? Take five minutes and try to decide which superstars from your continent you would choose for your squad. No matter where you come from, it won’t take you long to realize that you have some difficult decisions to make.

The Continental Football Cup promises a celebration of football at its highest level with exciting games between evenly matched teams. We can’t wait!

Then help us out and become an ambassador for the Cup!